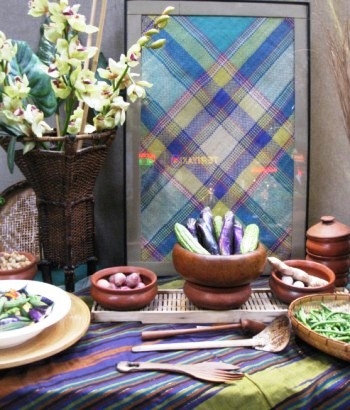 The annual Pagdiriwang Filipino Festival held last June 4 - 5, 2011 at the Seattle Center House featured the many facets of Philippine culture. Spearheaded by the dynamic Flori Montante of the Filipino Cultural Heritage Society of Washington (FCHSW), the event, held to commemorate the Philippine Indepencence Day, celebrated its 25 years of existence this year.  Aside from the food and vendors' booths and live programming of folk dances, songs, martial arts, children's games, fashion show, rondalla music performed by the Likha group from San Francisco and the Drill Team routine by the FYA, there were special art and artifact exhibits around the venue.  Works of local artists Weng Gavino, Charles Wandag and Olivia Zapata and visiting artists from the Philippines, Grandier Bella and daughter Gemina Bella, were featured, as well as the cultural artifact collections by Likha, Burton Holt and Melanie Paredes.

Among the exhibits, the annual Culinary Art Exhibit curated by Violeta Noriega on the main floor of the Seattle Center House once again drew raves. The colorful display was coordinated this year with the rustic Bahay Kubo structure. This combination proved to be the visitors' joyful oasis and favorite photo spot. The exhibit entitled "Culinary Arts at the Bahay Kubo" featured the vegetables in the popular Philippine Folk Song Bahay Kubo and an appetizing tray of sumptuous snacks by the bamboo benches. Some visitors even sang the folksong with gusto while viewing the exhibit.

It was another successful Pagdiriwang event under the Festal program, enjoyed by the public and the community. Plans for next year's festival are in the works.